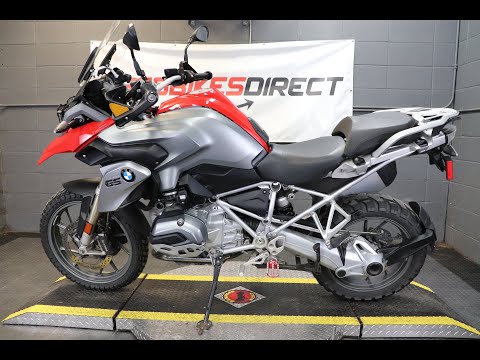 112 people have recently viewed it.
Description

The BMW R 1200 GS ΓÇô the icon of all travel enduros. For 32 years “the GS” has been defining its segment and has proven to be the trusty companion on any motorcycle adventure. BMW Motorrad is now embarking on a new chapter of its success story and is yet again perfecting the iconic R 1200 GS.

Powerful; refined; and high revving. The R 1200 GS is powered by a new opposed twin engine design delivering 125 hp. Based on a new concept of combined air and liquid cooling and vertical flows through the cylinders; the engine operates efficiently; reliably; and with high torques at all times. Further improvements like the new wet clutch with antihopping feature; the electromotive throttle actuator E-Gas; and the optional “riding modes” make the opposed twin engine the perfect drive solution at the heart of the new R 1200 GS.

The new R 1200 GS is ready for any terrain; thanks to the greater rigidity of its main frame and its enhanced Paralever and Telelever for even greater enduro steering accuracy. The optional Dynamic ESA configures the suspension automatically to the terrain and load conditions. The GS provides even more functions with the optional “riding modes”; a set of four different configurations that can be selected at the push of a button.

At first glance; the “new one” too is a genuine GS: robust; dynamic; and full of character. New body panels with a perfect finish underscore its high quality character. The new cooling concept was integrated seamlessly into the distinctive design; and the visual emphasis moved to the front. The new R 1200 GS now gives the impression of more balance and power. Thanks to its extensive range of options; the R 1200 GS is absolutely unique. With an innovative; unique LED headlamp; cross spoke wheels; and a wide choice of options and packages; everyone can convert this enduro into “his” or "her" GS.

At the launch of the new R 1200 GS; BMW Motorrad will be setting a unique test ride in motion. In the “One World. One R 1200 GS.” event; BMW Motorrad will be sending five enduro adventurers on the redefined icon R 1200 GS on five tours all around the world. The first of its kind in the world; this project will be putting “the new one” to a gruelling test ΓÇô and; with a little luck; give you too the opportunity for the tour of your life.