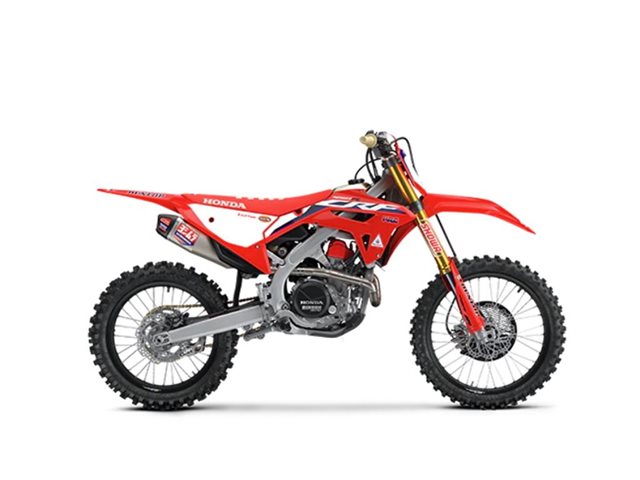 When it comes to winning; the Honda CRF450R is the machine championships are made of. And after your first ride; you’ll know why. The engine makes tremendous; instant power; thanks to Honda’s exclusive Unicam® design. The chassis is an active part of the handling equation; backed up with premium Showa suspension at both ends. But what the spec charts can’t show is the level of refinement that only Honda brings to the class; all with the goal of letting you rail through the corners; flatten out the whoops; ace the rhythm sections and do it lap after lap with incredible precision.

Looking for the best of the best? Then check out our CRF450RWE (WE for Works Edition). We’ve fine-tuned it with special touches like an exclusive Yoshimura exhaust; Twin Air filter; Throttle Jockey seat cover; Hinson clutch basket and cover; premium DID DirtStar LT-X rims; Kashima and titanium nitrate-coated forks; a red cylinder head cover; and hands-on touches like special cylinder-head porting. Both the RWE and the CRF450R get suspension and engine setting changes for 2022; sharpening the best bike on the track even a little more. Ready to win? Because we’re ready to ride.

Great handling starts with a superior frame; and that’s one place where the CRF450R’s chassis puts you out front. First; it’s light—over a pound and a half lighter than the previous generation’s. By making the frame’s main spars narrow; we save weight; but more important we make the chassis more responsive by fine-tuning the lateral rigidity. The result is a bike that gets into; around; and out of corners faster.

The CRF450R features the first hydraulically actuated clutch we’ve offered outside of our works bikes. Made by Nissin; it’s the same design as in our Grand Prix MX machines; and performs better than third-party conversions. You get a clutch-lever pull that’s ten percent lighter at its peak; even though it’s paired with a new; stronger 8-plate clutch. Plus; you’ll never have to worry about making a clutch-cable adjustment; even during the longest events.

Along with the special air filter; the airbox shape helps deliver more torque. You can access the airbox through the left number plate. And because the CRF450R’s filter has no rubber gasket where it interfaces with the intake boot; cleaning and servicing the filter is faster and less messy than ever.